10 Foods Which Can Potentially Help To Destroy Cancer Cells

You are here: Home / Health & Wellness / 10 Foods Which Can Potentially Help To Destroy Cancer Cells 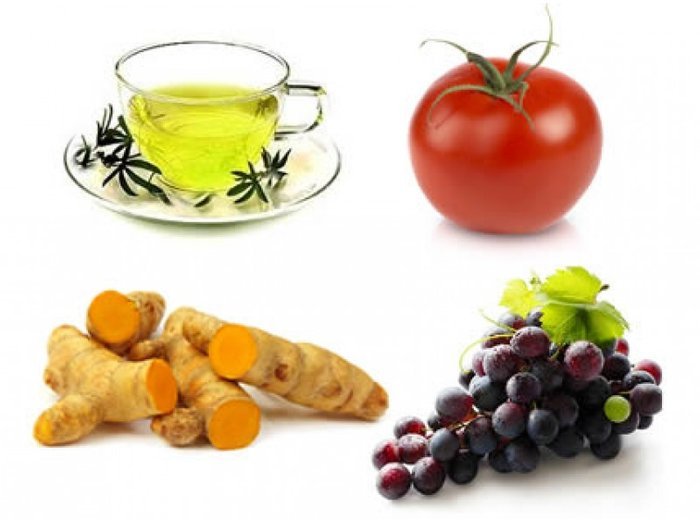 There are no absolutes or guarantees in healthcare. There is no one treatment that works 100% of the time. The only sure thing is that the more accurate information and knowledge that you acquire, the better informed you will be as a treatment option decision maker.

What we eat can either feed or inhibit cancer cells. When given the proper arsenal of nutrients, cancer cells can potentially be defeated by the human immune system. You may not realize this, but we all, from time to time have cells that malfunction and become cancer cells. A tumor only forms when the immune system fails to function as it was designed to and doesn’t destroy these rouge cancer cells.

1. Turmeric – Curcumin, possibly the most powerful antioxidant known from the popular Indian spice Turmeric, has countless health benefits. A recent study led by a research team in Munich showed that it can also inhibit formation of metastases. Curcumin exerts anti-inflammatory and anti-oxidative effects by inhibiting tumor necrosis factor-alpha (TNF-alpha), suggesting that its effect on endothelial function may be mediated by the suppression of inflammation and/or oxidative stress via down-regulation of TNF-alpha.

2. Sea Vegetables – Nori, hijiki, wakame, arame, kombu and kelp are just a few of several varieties of sea vegetables with potent effects on cancer. They are a rich source of many wonderful minerals, including magnesium, calcium, iron, and bioavailable iodine.

3. Grapes and Resveratrol – Resveratrol is a phenolic compound that contributes to the antioxidant potential of red grapes. Resveratrol is not only an antioxidant and antimutagen, but also reduces oxidant-caused cell death. Resveratrol has been shown to inhibit production of nitric oxide and tumor necrosis factor alpha (TNF-A) by lipopolysaccharide-stimulated Kuppfer cells. Kuppfer cells are macrophages (white blood cells) fixed in place in the liver. Their chronic overproduction of nitric oxide and TNF-A due to chronic infection can cause severe liver damage.

4. Chlorella and Spirulina – Scientists in South Korea recently found that carotenoids from chlorella may be effectively used to prevent cancer in humans. They discovered the primary carotenoid from C. ellipsoidea is violaxanthin, while the major carotenoid from C. vulgaris is lutein. They examined the activity of semi-purified extracts of these carotenoids against human cancer and found they inhibited cancer cell growth in a dose-dependent manner.

5. Green Tea – The health benefits of green tea are due to the presence of a group of plant flavonoids called catechins. Of particular interest to researchers is epigallocatechin-3-O-gallate (EGCG), the primary catechin in green tea.

6. Cruciferous Vegetables – Cruciferous vegetables contain vitamins, minerals, other nutrients, and chemicals known as glucosinolates. These chemicals break down into several biologically active compounds that are known to possess anticancer effects. Arugula, broccoli, cabbage, cauliflower, kale, turnips and collard greens are a few among many different types of cruciferous vegetables which are rich in nutrients, including several carotenoids (beta-carotene, lutein, zeaxanthin); vitamins C, E, and K; folate; and minerals.

7. Tomatoes – Regular consumption of tomato and its products is being consistently associated with lower risk of several types of cancer and, to a lesser extent, coronary heart disease. Among the many tomato components credited with healthful properties, carotenoids and particularly lycopene are being actively investigated.

8. Medicinal Mushrooms – Mushrooms have been used for at least 5,000 years for nutritional and medicinal purposes. Anti-viral and anti-cancer effects have been demonstrated in more than 50 species through animal and in vitro studies. Six components of these mushrooms have been investigated for their activity in human cancers: the lentinan component ofshiitake, schizophyllan, active hexose correlated compound (AHCC), maitake D-fraction and two components of Coriolus versicolor.

9. Garlic – The study, published online in the journal Cancer Prevention Research,notes that Chinese medicine has used garlic since 2,000 BC. The authors suggest compounds such as diallyl sulfide–that are released when a garlic bulb breaks into cloves–may contribute to the herb’s potential preventative powers.

10. Hemp – Hemp oil promotes full body healing and raises melatonin levels thousands of times higher than normal. When the pineal gland produces vast amounts of melatonin, it causes no harm to the body but it is very hard on the condition you are suffering from and indeed can eliminate it.

If you have cancer or know someone with cancer, it may be a good idea to work with the treating doctors to see which of these foods may be potentially beneficial to a given case.